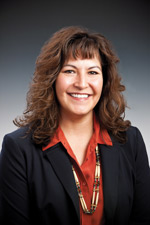 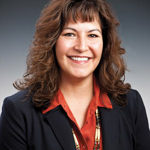 Michelle Anderson is the President of Ahtna, Incorporated. As an Ahtna shareholder, Michelle is a member of the Udzisyu (Caribou) clan. Raised in the Ahtna Region, Michelle graduated from Glennallen High School. She holds a Bachelor of Arts in Political Science from the University of Alaska Anchorage and a Master of Arts in Rural Development from the University of Alaska Fairbanks.

Michelle is the mother of two sons, Alexander and Austin, who are attending college. She is personally interested in learning Ahtna protocols, clan histories, Ahtna land use history, and Ahtna traditional stories, as well as Alaska Native political history, reading, genealogy, and writing.

Michelle has served as the Ahtna, Incorporated Representative on the AFN Board for two years. From 1997 to 2000, she served as the Ahtna Village Representative. On serving on the AFN Board, Michelle states: “It’s an honor to serve with men and women who work hard for their people and all Alaska Native peoples. There is careful decision-making, there is respect for one another, and we back each other up. There is no competition, only a passionate determination to protect those we serve.”